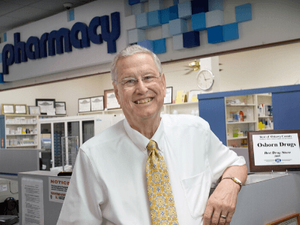 William E Osborn was born in Commerce, OK in 1934 to Jesse and Nola Osborn. His father was a lead and zinc miner and his mother a school and music teacher. His father died when he was 10 years old leaving Mrs. Osborn, William and his sister, Kathryn. He attended schools in Picher, Commerce and Tahlequah, before coming to Miami in the 7th grade. He played the saxophone for 6 years in the MHS band and graduated in 1952. Willie’s first job in downtown Miami at age 11 was setting pens at a bowling alley and then shining shoes in 1948. He was hired by John Wiley as a soda jerk at Wiley Drug in 1950. In addition, he delivered prescriptions on a bicycle, mopped and swept, and eventually was allowed to help in the pharmacy. He attended the University of Kansas City School of Pharmacy working his way through school with jobs in pharmacies and drugstores in the Kansas City area and each summer in Miami at Wiley’s. After graduating “cum laude” in 1956 he worked for Haslett Drug in Vinita and Jameson Drugs in Joplin before John Wiley brought him home to Miami in 1958. He bought his first interest in the store in 1968 and became owner in 1971 when he established Osborn Drugs, Inc. Osborn Drugs under his leadership has been an integral part of Miami’s history since that time supporting schools, civic clubs, downtown revitalization and industrial development.

This situation is unique, because rather than Osborn Drugs owning these stores solely, Willie has helped young pharmacists buy into these businesses making them partners. These young people are expected to live in these communities and become good citizens. They have each been very successful with Willie’s financial leadership, business advice and overall support. Willie is an “enabler” in the best sense of the word. He also encouraged Bill, his son, to be active in local, state and national pharmacy groups. Bill now serves on the Oklahoma State Board of Pharmacy, Pharmacy Providers of Oklahoma Board and vice president of the National Community Pharmacy Association.

Willie served his community in a variety of ways- coached youth basketball teams, treasurer of Little League and Washington School PTA, president of NEO’s basketball Tipoff Club, member of NEO football Booster Club, provided a scholarship at NEO for the last 35 years, danced in Miami Misbehavin’, has been chairman of March of Dimes Drive, sung in a Community Chorus, sponsored Miami’s Community Concert Series and Miami Little Theater. He was a supporter of Miami Public School System. He was on the committee that worked to get the new High School built at the present site. He always supported and was a member of the Miami Public School Enrichment Foundation. People in the community know where to go when they need help.

As far as the Coleman Theatre Beautiful (historic movie palace built in 1929) restoration goes, he made the initial contact with the Coleman family, encouraged the Miami City Council to accept the gift, has kept the project going through “thick and thin” since 1986 and plans to continue to do so until it is completed. After having had the use of the auditorium in the old high school and appearing in plays, concerts, assemblies and operettas there, he felt strongly that the Coleman could provide such a place for today’s children and worked toward that goal with a vengeance. The school system now has the use of the Coleman through an agreement with the School Board and the Superintendent of Schools is an automatic voting member of the Miami Downtown Redevelopment Authority, which manages the theater on all accounts. He loves to see the stage filled with 100 to 300 excited, big eyed, squirming elementary children doing Christmas programs or more “cool” mid and high school band and chorus concerts. Although the restoration of the Coleman is a continuing project, the theatre also has become a real “boon” to the City of Miami in many ways including tourism, national exposure and civic pride besides providing a cultural center.

His latest project is a community effort to rejuvenate the Ottawa County Historical Society in order to maintain the Dobson Museum. The collection housed in the Museum is at risk, but Willie is sponsoring workshops directed by a museum consultant teaching volunteers how to protect artifacts and documents concerning our history.